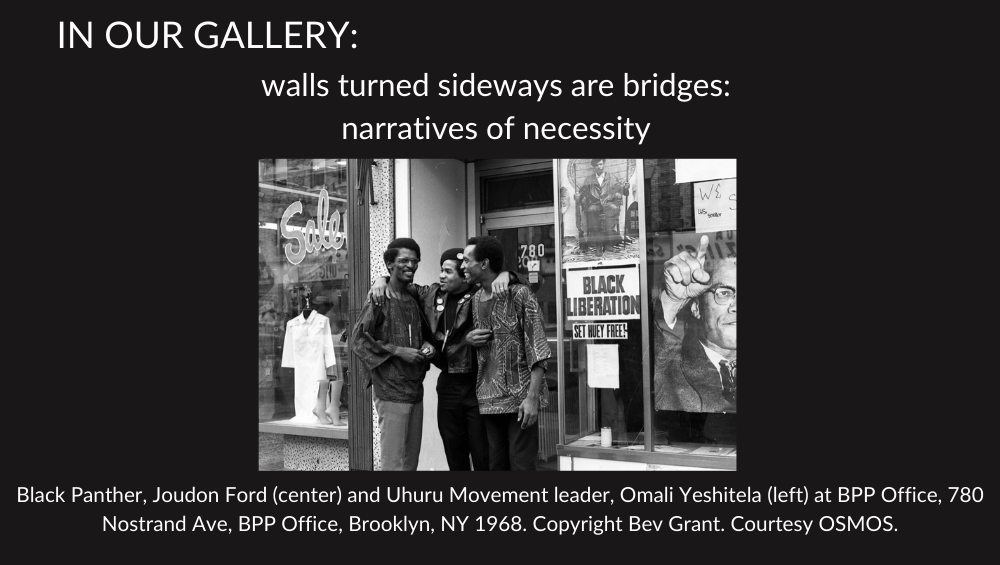 In Our Gallery – walls turned sideways are bridges: narratives of necessity

Exhibition on view through January 2.

Be aware that at this time, masks are still required by all patrons inside for all our events. Thank you for your cooperation.

This exhibition focuses on photographer, activist and filmmaker, Bev Grant’s 1968 -1972 photo work focused on documenting the evolution of youth radical community activist movements that became prominent in the late 1960s and early 1970s, through organizations like the Black Panther Party, The Young Lords Party, Students for Democratic Society, Gay Liberation Front among many others who sought for social changes. This phenomenon would eventually have a national and global impact, and yet today most of what is known about the SDS, Gay Liberation Front, Black Panthers, Young Lords, and other activist organizations is erroneous or misleading. It is not widely known that the Black Panther Party had Mexicans, Puerto Ricans, Central Americans, Native Americans, Armenians and Asians in their ranks, or that the Young Lords was originally a Chicago Puerto Rican street gang for almost 10 years before being politicized into a community activist organization, or that the Gay Liberation Front evolved from the 1969 Stonewall rebellion or that Black Panther Party leaders, Huey P. Newton and Eldridge Cleaver publicly supported Gay liberation.

The influence that organizations, like the BPP, Young Lords, GLF and other groups had on society stimulated substantial changes in healthcare; medical practices including TB testing, the creation of national Sickle cell anemia testing, and free health clinics for working class communities. These groups also encouraged education and housing improvements with programs such as free children’s breakfasts, early versions of charter schools, free fumigations, lead poison testing, and community sustainability through economic empowerment. The Black Panther Party, Young Lords and Gay Liberation Front encouraged transparency in state and local governmental policies and affairs, including police accountability. This exhibition illuminates some of these interdisciplinary practices, furthering our understanding of these organizations and their long-term social impact. Bev Grant’s photos capture rarely known historical moments that have not been seen for more than 50 years. 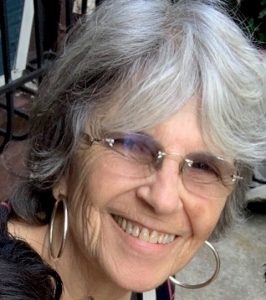 BEV GRANT (born 1942) grew up in Portland, Oregon and moved to New York City in the 1960s. She was radicalized through the Anti-War Movement and became involved in the Women’s Movement and the Civil Rights Movement as an activist, musician, and photographer. Much of Bev Grant’s photography documents political activism and consciousness raising events from1968 until 1972. Thereafter, she began to focus more on her music. Her exceptional oeuvre includes photographs of the Black Panther Free Breakfast Program, the Jeanette Rankin Brigade March on Washington, the Fillmore East Takeover, the Poor People’s Campaign, GIs Against the War, and the Young Lords Garbage Offensive. Additionally, Grant’s photography depicts her own activism and her involvement with New York Radical Women. Her documentation of the Miss America Protest and W.I.T.C.H. Hex on Wall Street (both in 1968) has been featured in numerous news outlets and exhibitions.

Grant’s photography was used in the film She’s Beautiful When She’s Angry, released in 2015, and her first solo exhibition, in 2018, was co-curated by Alison Gingeras and Cay Sophie Rabinowitz at OSMOS Address in New York City. Bev Grant’s work is currently on view in Sorcieres at the Université Libre de Bruxelles (ULB) and Resistance at the Bunker in West Palm Beach. In 2022 she will have a solo presentation at the American Labor Museum, Botto House National Landmark in New Jersey.

Throughout the 1970s and 1980s, Bev Grant’s band Human Condition performed folk, rock, and world music. In 1991, Grant joined the United Association of Labor Education Northeast Union Women’s Summer School as Cultural Director. Since 1997, she has been Founder and Director of the Brooklyn Women’s Chorus. From 2006 to 2008, Grant performed with other female musicians as part of a group called Bev Grant and the Dissident Daughters and later as WOOL&GRANT. She released the solo album, It’s Personal, in 2017.

Looking back, Grant has articulated an important connection that many women’s liberation organizers had participated in the Civil Rights Movement, and they brought valuable skills and knowledge from that work. In her own words,

“Today, I hope that people look at the photographs and see the intersectionality and humanity of people struggling together towards a better world. Being a photographer, having a camera, gives me a sense of purpose. … I’ll soon be 80 years old. I still feel young and purposeful. I am hopeful about the future, but I don’t try to give advice to the younger folks who are shaping it. The most I have to offer is a look back at history – from which we all can learn”. From Bev Grant Photography 1968 to 1972, edited by Cay Sophie Rabinowitz, published by OSMOS Books, New York, (2021) 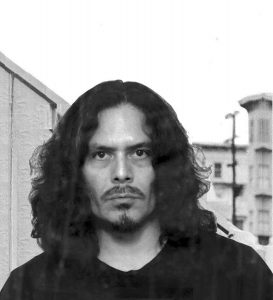 cordova’s work addresses the metaphysics of space and time and how objects change and perception changes when we move around in space.

He received a BFA from The School of the Art Institute of Chicago,1996 and an MFA from Yale University, 2004. 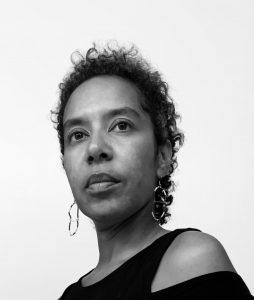 MARIE VICKLES is the Director of Education at the Pérez Art Museum Miami and administers programs at the museum that directly serve over 100,000 youth and adults annually. Marie has organized arts educational programs, workshops, and exhibitions across the United States and the Caribbean for over 15 years. She is currently the Curator-in-Residence at the Little Haiti Cultural Complex and maintains an active practice as an independent curator producing over 30 exhibitions and curatorial projects. Her curatorial work includes the co-curation of Prizm Art Fair, Miami, FL (2013), Visionary Aponte: Art and Black Freedom, Little Haiti Cultural Complex, Miami, FL (2017), walls turned sideways are bridges: narratives of resistance at Florida Agricultural and Mechanical University (FAMU), Tallahassee, FL (2019), and Dust Specks on the Sea, Little Haiti Cultural Complex, Miami, FL (2019). In her work as an arts educator and cultural practitioner, she is concerned with the relationship between creativity and community engagement – with the goal of supporting equity, sustainability, and access for all, through the arts.