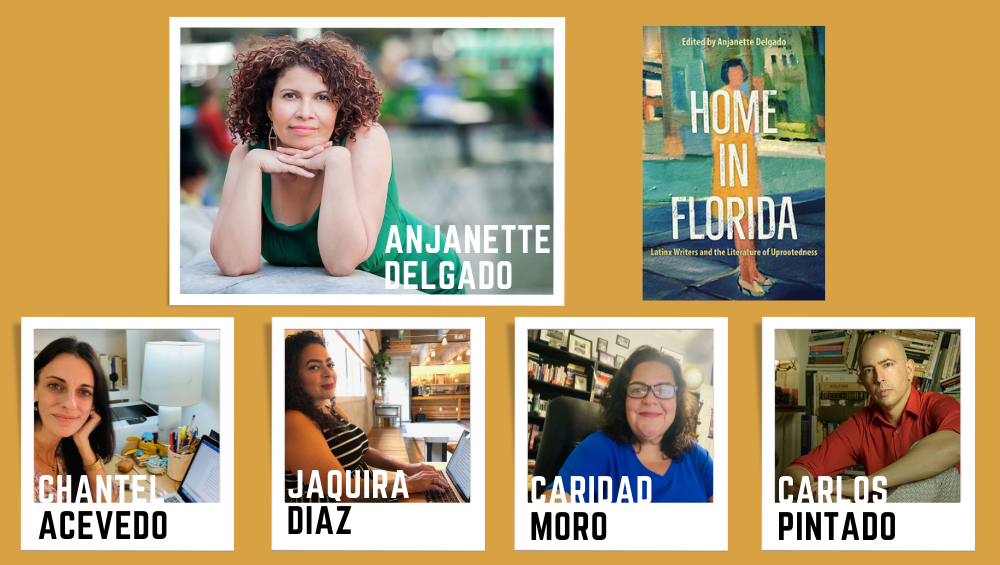 A Virtual Panel with Anjanette Delgado

Home in Florida: Latinx Writers and

the Literature of Uprootedness 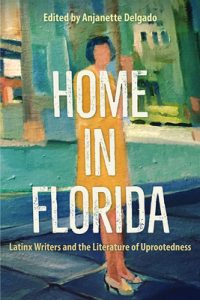 A powerful collection of contemporary voices

Showcasing a variety of voices shaped in and by a place that has been for them a crossroads and a land of contradictions, Home in Florida presents a selection of the best literature of displacement and uprootedness by some of the most talented contemporary Latinx writers who have called Florida home.

Featuring fiction, nonfiction, and poetry by Richard Blanco, Jaquira D az, Patricia Engel, Jennine Cap Crucet, Reinaldo Arenas, Judith Ortiz Cofer, and many others, this collection of renowned and award-winning contributors includes several who are celebrated in their countries of origin but have not yet been discovered by readers in the United States. The writers in this volume–first-, second-, and third-generation immigrants to Florida from Cuba, Mexico, Honduras, Per , Argentina, Chile, and other countries–reflect the diversity of Latinx experiences across the state.

Editor Anjanette Delgado characterizes the work in this collection as literature of uprootedness, literatura del desarraigo, a Spanish literary tradition and a term used by Reinaldo Arenas. With the heart-changing, here-and-there perspective of attempting life in environments not their own, these writers portray many different responses to displacement, each occupying their own unique place on what Delgado calls a spectrum of belonging.

Together, these writers explore what exactly makes Florida home for those struggling between memory and presence. In these works, as it is for many people seeking to make a new life in the United States, Florida is the place where the uprooted stop to catch their breath long enough to wonder, “What if I stayed? What if here could one day be my home?”

ANJANETTE DELGADO is a Puerto Rican writer and journalist based in Miami. She is the author of The Heartbreak Pill: A Novel and The Clairvoyant of Calle Ocho. She has written for the New York Times “Modern Love” column, Vogue, NPR, HBO, the Kenyon Review, Pleiades, the Hong Kong Review, and others.

CHANTEL ACEVEDO: Called “a master storyteller” by Kirkus Reviews, Chantel Acevedo is the author of the novels  Love and Ghost Letters,  A Falling Star, The Distant Marvels, which was a finalist for the 2016 Andrew Carnegie Medal for Excellence in Fiction, and , The Living Infinite, hailed by Booklist as a “vivid and enthralling tale of love and redemption.” Acevedo’s middle grade duology. Muse Squad, (called “Riveting and suspenseful” by School Library Journal) was published by Balzer + Bray. She is Professor of English at the University of Miami, where she directs the MFA program.

JAQUIRA DÍAZ was born in Puerto Rico. Her work has been published in Rolling Stone, the Guardian, Longreads, The Fader, and T: The New York Times Style Magazine, and included in The Best American Essays 2016. She is the recipient of two Pushcart Prizes, an Elizabeth George Foundation grant, and fellowships from the MacDowell Colony, the Kenyon Review, and the Wisconsin Institute for Creative Writing. She lives in Miami Beach with her partner, the writer Lars Horn.

CARIDAD MORO is the award-winning author of Visionware. She is the recipient of an Elizabeth George Foundation Grant and a Florida Individual Artist Fellowship in poetry. Her poems and essays have been nominated for the Pushcart Prize and Best of the Net and have appeared in numerous publications and anthologies. She is the Associate Editor for the daily online literary journal, SWWIM Every Day.

CARLOS PINTADO is a Cuban American writer, playwright, and award-winning poet who immigrated to the United States in the early 1990s. His book Autorretrato en azul received the prestigious Sant Jordi International Prize for Poetry, and his book El azar y los tesoros was a finalist for Spain’s Adonais Prize in 2008. His work has been translated into English, Italian, German, French, Turkish, Portuguese, and Italian. Nine Coins/Nueve monedas is his latest collection of poetry.