Holding a Mirror up to Nature: A Virtual Evening with James Gilligan & David A.J. Richards with Marcia Pally

Holding a Mirror up to Nature: Shame, Guilt and Violence in Shakespeare

Shakespeare has been dubbed the greatest psychologist of all time. This book seeks to prove that statement by comparing the playwright’s fictional characters with real-life examples of violent individuals, from criminals to political actors. For Gilligan and Richards, the propensity to kill others, even (or especially) when it results in the killer’s own death, is the most serious threat to the continued survival of humanity. In this volume, the authors show how humiliated men, with their desire for retribution and revenge, apocryphal violence and political religions, justify and commit violence, and how love and restorative justice can prevent violence. Although our destructive power is far greater than anything that existed in his day, Shakespeare has much to teach us about the psychological and cultural roots of all violence. In this book the authors tell what Shakespeare shows, through the stories of his characters: what causes violence and what prevents it. 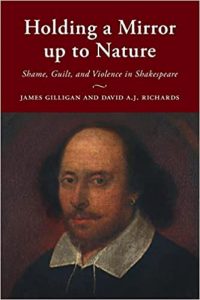 JAMES GILLIGAN, Professor of Clinical Psychiatry at New York University, wrote Violence (1996), Preventing Violence (2001), Why Some Politicians Are More Dangerous Than Others (2011), a Times Literary Supplement ‘Book of the Year, and co-authored The Dangerous Case of Donald Trump (2016), a New York Times best-seller. His advice has been sought by President Clinton, Tony Blair, Kofi Annan, the World Health Organization, and the World Court.

DAVID A.J. RICHARDS, Professor of Law at New York University, is the author of over 20 books including: Free Speech and the Politics of Identity (1999), Disarming Manhood: Roots of Ethical Resistance (2005), The Deepening Darkness: Patriarchy, Resistance, and Democracy’s Future (Cambridge University Press, 2009, with Carol Gilligan), and Why Love Leads to Justice: Love Across the Boundaries (Cambridge University Press, 2015).

MARCIA PALLY teaches at New York University and held the Mercator Guest Professorship in the Theology Faculty at Humboldt University-Berlin, where she remains an annual guest professor. Her most recent books are From This Broken Hill I Sing to You: God, Sex, and Politics in the Work of Leonard Cohen (2021), Mimesis and Sacrifice (ed., 2019), Commonwealth and Covenant: Economics, Politics, and Theologies of Relationality (2016), and The New Evangelicals: Expanding the Vision of the Common Good (2011). Professor Pally has also been a columnist and contributor to U.S. and European periodicals, including The New York Times, The Guardian, Religion News Service, Religion and Ethics, Commonweal, Tikkun, Internationale Politik (German Council on Foreign Relations), die Zeit, and Südduetsche Zeitung.