Fred Korematsu and His Quest for Justice: An Evening with Lorraine K. Bannai and Amarillys E. Garcia-Perez

Enduring Conviction: Fred Korematsu and His Quest for Justice

Lorraine K. Bannai, attorney, author and professor of law tells a very personal story of FredKorematsu; a simple man courageous enough to challenge criminal conviction and the removal and incarceration of 120,000 persons of Japanese ancestry during WWII.  Through her publications and work with the Korematsu Center, she continues his legacy and advocates for victims of civil rights violations while reminding us that racial profiling is still a national problem. 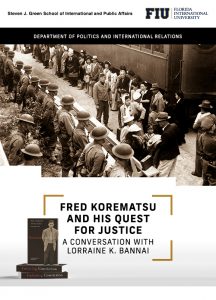 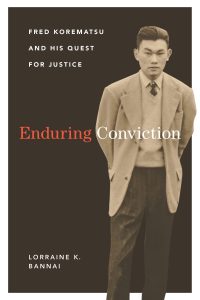 Fred Korematsu’s decision to resist F.D.R.’s Executive Order 9066, which provided authority for the internment of Japanese Americans during World War II, was initially the case of a young man following his heart: he wanted to remain in California with his white fianc e. However, he quickly came to realize that it was more than just a personal choice; it was a matter of basic human rights.

After refusing to leave for incarceration when ordered, Korematsu was eventually arrested and convicted of a federal crime before being sent to the internment camp at Topaz, Utah.

He appealed his conviction to the Supreme Court, which, in one of the most infamous cases in American legal history, upheld the wartime orders. Forty years later, in the early 1980s, a team of young attorneys resurrected Korematsu’s case. This time, Korematsu was victorious, and his conviction was overturned, helping to pave the way for Japanese American redress.

Lorraine Bannai, who was a young attorney on that legal team, combines insider knowledge of the case with extensive archival research, personal letters, and unprecedented access to Korematsu his family, and close friends. She uncovers the inspiring story of a humble, soft-spoken man who fought tirelessly against human rights abuses long after he was exonerated. In 1998, President Bill Clinton awarded Korematsu the Presidential Medal of Freedom.