Escape from Castro’s Cuba: An Evening with Tim Wendel and Saul Wisnia

An Evening with Tim Wendel

In conversation with Saul Wisnia

Escape from Castro’s Cuba: A Novel

In this visionary sequel to Castro’s Curveball, the former Washington Senators Minor League catcher has returned to Havana with a small role in a movie being filmed on location. Billy Bryan soon realizes that this place and his past remain as star-crossed as when he played winter ball in the Cuban capital decades before.

Against his better judgment, Billy becomes entangled in a scheme to spirit a top baseball prospect off the island. This pits him against his old friend Fidel Castro. Despite being in his final days, the dictator remains a dangerous adversary, as does the Cuban sports machine and the Mexican crime syndicates that now direct baseball talent toward the U.S. Major Leagues.

In Escape from Castro’s Cuba, Billy must once again navigate the crosscurrents of the so-called City of Columns: a place where the sunsets from the Hotel Nacional along the Malecón breakwater are as beautiful as ever, but where the alleyways in Old Havana still fan out, crooked and broken, like an old catcher’s fingers. 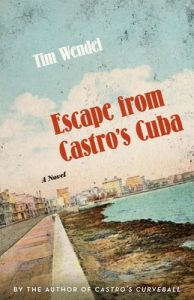 Tim Wendel is the acclaimed author of fourteen books, including Castro’s Curveball (Bison Books, 2006) and Summer of ’68: The Season That Changed Baseball—and America—Forever. He is a founding editor of USA Today Baseball Weekly and a writer in residence at Johns Hopkins University. His stories and columns have appeared in the New York Times, the Washington Post, National Geographic, Psychology Today, and Esquire. Visit his website www.timwendel.com.

Saul Wisnia has authored or co-authored numerous books, including Son of Havana: A Baseball Journey from Cuba to the Big Leagues and Back (with Luis Tiant, Diversion Books, 2019) andMiracle at Fenway(St. Martin’s Press, 2014). A former sports and news correspondent at the Washington Post and feature writer at the Boston Herald, his writing has appeared in Sports Illustrated, the Boston Globe, and Boston Magazine. Wisnia co-chairs the Boston chapter of the Society of American Baseball Research, and blogs when time allows at saulwisnia.blogspot.com.