Poaching for tusks is a deadly game that must be stopped.

Dr. Robert Merriweather takes on the corruption of rhino and elephant poachers and the corrupt international network selling their ivory and horns for profit.

When Merriweather attends the double wedding of twin brothers of Chinese descent, he has no idea he will soon be embroiled in a murder mystery. When both grooms are found dead the next morning, their father asks Merriweather for his help. He is not surprised when the autopsy reveals the young men had ingested ground-up rhino horn on their wedding night, as they are of Chinese descent and rhino horn is a common aphrodisiac in Asian cultures. However, when Merriweather learns the powder has been cut with Viagra and some unknown substance that caused the men’s cardiac arrest, he suspects a much more wicked force at work.

Deadly Game spans the globe, from the African brush to the streets of Johannesburg, from Hong Kong to Miami, and has an eclectic cast of characters that includes a Ugandan rebel leader, diminutive professor Dr. Lurie, and larger-than-life Australian mercenary Big Jim McCullar, each with their own agenda and willing to do anything necessary to win the deadly game. 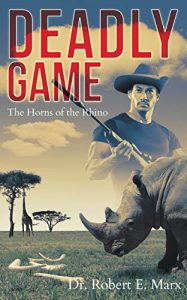