Diversity in the Workplace: A Virtual Afternoon with Bärí A. Williams and Jerusha Stewart

A Virtual Afternoon with Bärí A. Williams

Diversity in the Workplace: Eye-Opening Interviews to Jumpstart Conversations about Identity, Privilege and Bias 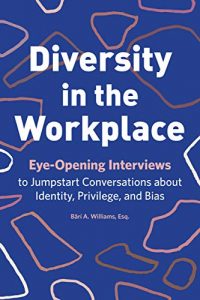 In order to create an inclusive working environment, it is important for companies to understand the experiences that diverse employees face in the workplace. Diversity in the Workplace is a guided tour of what it means to be a minority in today’s labor force.

Containing 25 real-life interviews, including stories of trailblazers fighting inequality, you’ll be exposed to a slice of life you may not have been privy to. This book explores real world issues in a modern workday dynamic for members of marginalized communities and managers looking to equalize an imbalance.

Diversity in the Workplace includes:

Move toward a more fair and bias-conscious future with Diversity in the Workplace.

BÄRÍ A. WILLIAMS is COO of Bandwagon Fan Club. Inc., a data and identity analytics tech company focused on the sports and entertainment space, and a diversity, inclusion and corporate social responsibility consultant. Prior to Bandwagon, she was VP of Legal, Business, and Policy Affairs at All Turtles, an AI startup studio, and the former Head of Business Operations Management for North America at StubHub, where she was responsible for business planning and operations to manage and oversee technical internal and external metrics, product innovation, and partnerships and drive P&L results across the company. She also serves as an advisor to startups in the enterprise and e-commerce space.

Prior to StubHub, Bärí was lead counsel at Facebook supporting internet.org connectivity efforts, building drones, satellites, and lasers, and supporting the company’s supply chain. She also successfully took on the passion project of creating and implementing Facebook’s Supplier Diversity Program, launched in October 2016.

Bärí is also a published author with bylines in the New York Times, WIRED, Fortune, and Fast Company. Her book, “Diversity in the Workplace: Eye-Opening Interviews to Jumpstart Conversations About Identity, Privilege, and Bias,” was released on March 31, 2020. Bärí has served as an advisor to startups in the enterprise and e-commerce space, including Blavity (and AfroTech), Owl (acquired by Amazon), and Telepath. She recently gave congressional testimony on racial bias in AI in financial services in Feb. 2020. She is also a board member for the California African American Museum, a member of The Links, Incorporated, and Alpha Kappa Alpha Sorority, Inc.

JERUSHA STEWART J.D., Chief Executive Officer: Jerusha Stewart is CEO and co-founder of TAKE YOUR SEAT.  The visionary online community exists to increase the number of Black directors on boards to accelerate boardroom inclusivity and corporate performance.  They’ve partnered with B Lab US/Canada and B Corps leaders from Beautycounter, Bombas, Murphy’s Naturals, Seventh Generation and Vital Plan to make change in the short term for the long term.  A graduate of Stanford Law School, Jerusha is passionate about solving inequities through mission-focused entrepreneurial initiatives.  Having served on both private and nonprofit boards, Jerusha advocates for relationship building as the remedy to racism. Come take action at Takeyourseat.co