A Virtual Event with Ted A. Henken and Sara Garcia Santamaria

The triumph of the Cuban Revolution gave the Communist Party a monopoly over both politics and the mass media. However, with the subsequent global proliferation of new information and communication technologies, Cuban citizens have become active participants in the worldwide digital revolution. While the Cuban internet has long been characterized by censorship, high costs, slow speeds, and limited access, this volume argues that since 2013, technological developments have allowed for a fundamental reconfiguration of the cultural, economic, social, and political spheres of the Revolutionary project.

The essays in this volume cover various transformations within this new digital revolution, examining both government-enabled paid public web access and creative workarounds that Cubans have designed to independently produce, distribute, and access digital content. Contributors trace how media ventures, entrepreneurship, online marketing, journalism, and cultural e-zines have been developing on the island alongside global technological and geopolitical changes.

As Cuba continues to expand internet access and as citizens challenge state policies on the speed, breadth, and freedom of that access, Cuba’s Digital Revolution provides a fascinating example of the impact of technology in authoritarian states and transitional democracies. While the streets of Cuba may still belong to Castro’s Revolution, this volume argues that it is still unclear to whom Cuban cyberspace belongs. 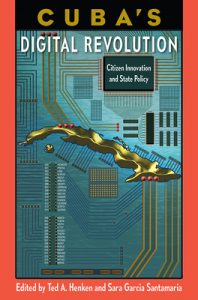 Ted A. Henken, associate professor of sociology and Latin American studies at Baruch College, City University of New York, is coauthor of Entrepreneurial Cuba: The Changing Policy Landscape and the author of Cuba: A Global Studies Handbook.

Sara Garcia Santamaria, associate professor of global communication at Universitat Ramon Llull, Barcelona, is coeditor of Media and Governance in Latin America: Towards a Plurality of Voices.