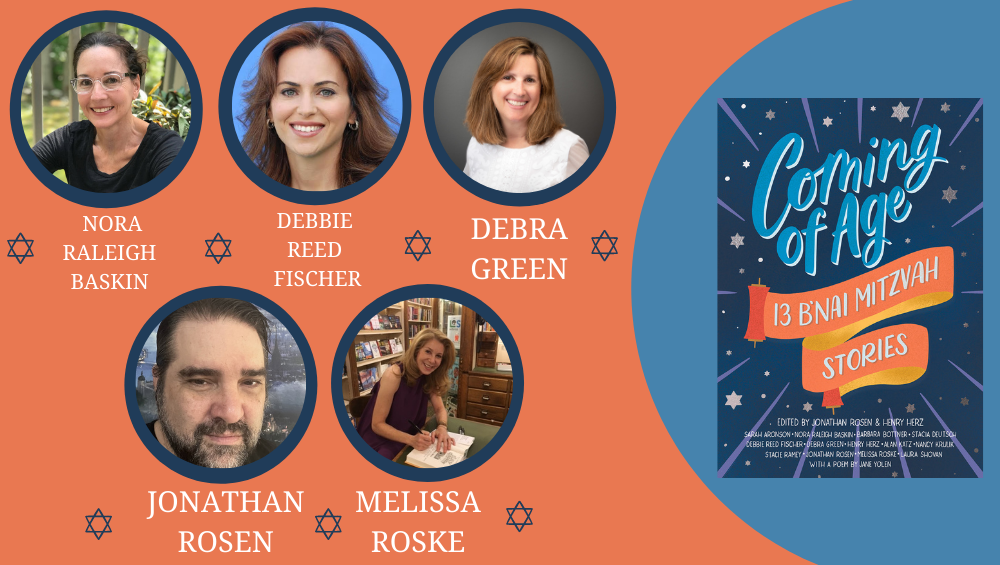 This short story collection highlights the diverse experiences of becoming an adult in the Jewish faith.

What does it mean to become an adult in your faith? Join thirteen diverse characters as they experience anxiety, doubt, and self-discovery while preparing for their b’nai mitzvah. And whether celebrating with a lavish party or in reception room A with an accordion player, the Jewish rite of passage remains the same. Filled with humor, hope, and history, there’s something in this anthology for every reader, regardless of their faith. 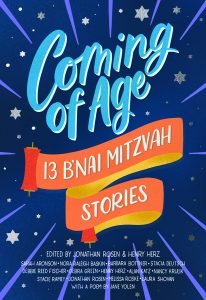 NORA RALEIGH BASKIN, a 2001 Publisher’s Weekly FLYING START, is the author of fifteen novels for young adults and a contributor to several short story collections. Her personal narrative essays have appeared in WRITER MAGAZINE, Boston Globe Sunday Magazine, and NCTE Voices From the Middle.  Her books have won several awards, including the 2010 American Library Association Schneider Family Book Award for Anything But Typical (S&S), and in 2016, an International Literacy Association Notable Books for a Global Society for Ruby on the Outside (S&S) Seven Clues to Home, a collaborative two-voice project was published Spring, 2020 (Knopf). Consider the Octopus will coming out with Henry Holt, April 2022. She is currently working on a novel for adults, a blend of memoir and fiction.

DEBBIE REED FISCHER is the award-winning author of novels for teens and tweens and has been praised by Kirkus Reviews for balancing “weighty issues with a sharp wit.” Her most recent book This is not the Abby Show (Random House/ Delacorte) won the Royal Palm Literary Gold Award for Best Children’s Book. Abby Show was twice honored as a PJ Library selection in 2017 and 2020 and has been compared to Jack Gantos’s Joey Pigza series (Publisher’s Weekly), as well as Jeff Kinney’s Diary of a Wimpy Kid and Renee Russell’s The Dork Diaries series (Booklist). Kveller.com selected Abby Show for its Beyond Judy Blume: Must-Reads for Jewish Girls list. In addition to writing novels, Debbie has contributed to anthologies, non-fiction books, magazines, newspapers, and TV scripts. A graduate of the University of Miami, Debbie has a degree in Screenwriting and worked for many years in the film business, then as a middle and high school English teacher. She also enjoys speaking at schools, literary conferences, and universities. Her short story This is What I’ll Tell You is in the anthology Coming of Age: 13 B’nai Mitzvah Stories (Albert Whitman & Company). A portion of the proceeds from this book goes to organizations that fight antisemitism. She is currently working on a middle grade novel set in 1939 Cuba, based on her family.

DEBRA GREEN AKA D.L Green AKA Debra Garfinkle is the author of 33 books for children and teens, including Violet and the Pie of Life, the Zeke Meeks series, and the Silver Pony Ranch series. Her books, mostly humorous, have been translated into eight languages. She lives in Southern California, where she also practices law. She loves speaking at libraries, schools, and conferences. Visit her at www. DebraLGreen.com .

JONATHAN ROSEN is a transplanted New Yorker who now lives with his family and rescue dog, Parker, in sunny South Florida. He is proud to be of Mexican-American descent, although neither country has really been willing to accept responsibility. He is the author of the Spooky Middle Grade titles, Night of the Living Cuddle Bunnies and its sequel, From Sunset till Sunrise, as well as the co-editor of the anthology of Jewish stories, Coming of Age: 13 B’Nai Mitzvah Stories, He is an administrator of the Middle Grade reading site, FromtheMixedUpFiles.com, and the co-host of the YouTube channel, Pop Culture Retro. He can also be found on his own site at www.Houseofrosen.com

MELISSA ROSKE is a writer of middle-grade fiction. Before spending her days with imaginary people, she interviewed real ones as a journalist in Europe. In London she landed a job as an advice columnist for Just Seventeen magazine, where she answered hundreds of letters from readers each week. Upon returning to her native New York, Melissa contributed to several books and magazines, selected jokes for Reader’s Digest (just the funny ones), and received certification as a life coach from NYU. In addition to her debut novel Kat Greene Comes Clean (Charlesbridge, 2017), Melissa’s short story “Grandma Merle’s Last Wish” appears in the Jewish middle-grade anthology, Coming of Age: 13 B’Nai Mitzvah Stories (Albert Whitman & Company). An active blogger for the popular MG website, From the Mixed-Up Files of Middle-grade Authors, Melissa lives in Manhattan with her husband, daughter, and the occasional dust bunny. Learn more about Melissa on her Website and follow her on  Twitter, Facebook, and Instagram.