Chasing My Cure: An Evening with David Fajgenbaum and Dr. Mikkael A. Sekeres

Books & Books and The University of Miami Department of Medicine…

An Evening with David Fajgenbaum

Chasing My Cure: A Doctor’s Race to Turn Hope Into Action

The powerful memoir of a young doctor and former college athlete diagnosed with a rare disease who spearheaded the search for a cure–and became a champion for a new approach to medical research.

David Fajgenbaum, a former Georgetown quarterback, was nicknamed the Beast in medical school, where he was also known for his unmatched mental stamina. But things changed dramatically when he began suffering from inexplicable fatigue. In a matter of weeks, his organs were failing and he was read his last rites. Doctors were baffled by his condition, which they had yet to even diagnose. Floating in and out of consciousness, Fajgenbaum prayed for a second chance, the equivalent of a dramatic play to second the game into overtime.

Miraculously, Fajgenbaum survived–only to endure repeated near-death relapses from what would eventually be identified as a form of Castleman disease, an extremely deadly and rare condition that acts like a cross between cancer and an autoimmune disorder.

More than five years later and now married to his college sweetheart, Fajgenbaum has seen his hard work pay off: A treatment he identified has induced a tentative remission and his novel approach to collaborative scientific inquiry has become a blueprint for advancing rare disease research. His incredible story demonstrates the potency of hope, and what can happen when the forces of determination, love, family, faith, and serendipity collide. 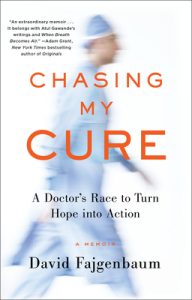 David Fajgenbaum, MD, MBA, MSc, is a graduate of Georgetown University, the University of Oxford, the University of Pennsylvania, and the Wharton School. An assistant professor of medicine at the University of Pennsylvania and the associate director for the Orphan Disease Center, he is cofounder and executive director of the Castleman Disease Collaborative Network, as well as the cofounder of the National Students of Ailing Mothers and Fathers Support Network. Dr. Fajgenbaum has been recognized with multiple awards, including the Forbes “30 Under 30” for healthcare and the RARE Champion of Hope Award for science. He has been profiled by major media outlets such as The New York Times, Forbes, Science, Reader’s Digest, and the Today show. He lives in Philadelphia with his wife, Caitlin, and their daughter, Amelia.

Dr. Sekeres is Professor of Medicine and Chief of the Division of Hematology at the Sylvester Comprehensive Cancer Center, University of Miami Miller School of Medicine. He earned a medical degree and a master’s degree in clinical epidemiology from the University of Pennsylvania School of Medicine. Dr Sekeres completed his postgraduate training at Harvard University, finishing an internal medicine residency at Massachusetts General Hospital and a fellowship in hematology-oncology at the Dana-Farber Cancer Institute in Boston. He is chair of the medical advisory board of the Aplastic Anemia and Myelodysplastic Syndrome (MDS) International Foundation, and formerly chaired the Oncologic Drugs Advisory Committee of the F.D.A, the MDS Research Fund of the Dresner Foundation, and the Cleveland Clinic Enterprise Pharmacy & Therapeutics Committee, where he was also Vice-chair for Clinical Research of the cancer center. An invited speaker at numerous meetings, grand rounds, and conferences, Dr Sekeres is a member of the American Society of Hematology, where he has served on the Executive Committee, the American Society of Clinical Oncology, and the Southwest Oncology Group—Leukemia Committee. His research focuses on patients with MDS and older adults with acute myeloid leukemia, and he has been the national and international primary study investigator on several phase I/II/III trials. He is the author or co-author of over 350 manuscripts and 650 abstracts published in leading journals such as NEJM, Blood, Journal of Clinical Oncology, Nature Genetics, Cancer Cell, Journal of the National Cancer Institute, Journal of Clinical Investigation, PLoS One, and Leukemia. He was the inaugural editor-in-chief of the ASH Clinical News magazine; he is on the editorial board of several journals; has written over 50 essays for The New York Times; and has authored 7 books, including When Blood Breaks Down: Life Lessons from Leukemia (MIT Press 2020).

Presented in partnership with