Why Didn’t You Tell Me?: A Virtual Evening with Carmen Rita Wong and Carmen Pelaez

Why Didn’t You Tell Me?: A Memoir 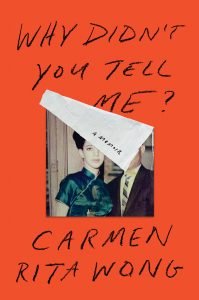 An immigrant mother’s long-held secrets upend her daughter’s understanding of her family, her identity, and her place in the world in this powerful and dramatic memoir

“This is the Carmen Rita Wong I know—fierce and true. Her story broke my heart and filled it up at the same time.”—Sunny Hostin, three-time Emmy Award–winning co-host of ABC’s The View and New York Times bestselling author of I Am These Truths

My mother carried a powerful secret. A secret that shaped my life and the lives of everyone around me in ways she could not have imagined.


Carmen Rita Wong has always craved a sense of belonging: First as a toddler in a warm room full of Black and brown Latina women, like her mother, Lupe, cheering her dancing during her childhood in Harlem. And in Chinatown, where her immigrant father, “Papi” Wong, a hustler, would show her and her older brother off in opulent restaurants decorated in red and gold. Then came the almost exclusively white playgrounds of New Hampshire after her mother married her stepfather, Marty, who seemed to be the ideal of the white American dad.

As Carmen entered this new world with her new family—Lupe and Marty quickly had four more children—her relationship with her mother became fraught with tension, suspicion, and conflict, explained only years later by the secrets her mother had kept for so long.

And when those secrets were revealed, bringing clarity to so much of Carmen’s life, it was too late for answers. When her mother passed away, Carmen wanted to shake her  soul by its shoulders and demand: Why didn’t you tell me?


A former national television host, advice columnist, and professor, Carmen searches to understand who she really is as she discovers her mother’s hidden history, facing the revelations that seep out. Why Didn’t You Tell Me? is a riveting and poignant story of Carmen’s experience of race and culture in America and how they shape who we think we are.

CARMEN RITA WONG is a writer and nonprofit board leader whose board positions include The Moth and the Planned Parenthood Federation of America. She was the co-creator and television host of On the Money on CNBC and was a national advice columnist for Glamour, Latina, Men’s Health, and Good Housekeeping. Wong is the author of a series of novels and two bestselling advice books. She is the founder and CEO of Malecon Productions, LLC, where she develops women-focused media and entertainment. She lives in Manhattan with her daughter.

CARMEN PELAEZ: An award winning playwright, actor and filmmaker, Carmen Pelaez is currently working on developing a television series Tropical Beasts. Her new play, The Cuban Vote, recently opened at Miami New Drama to raves from critics and audiences alike. In the political sphere she’s been a part of both President Obama and President Biden’s Cuba teams and has also served as a consultant on several local and national campaigns.