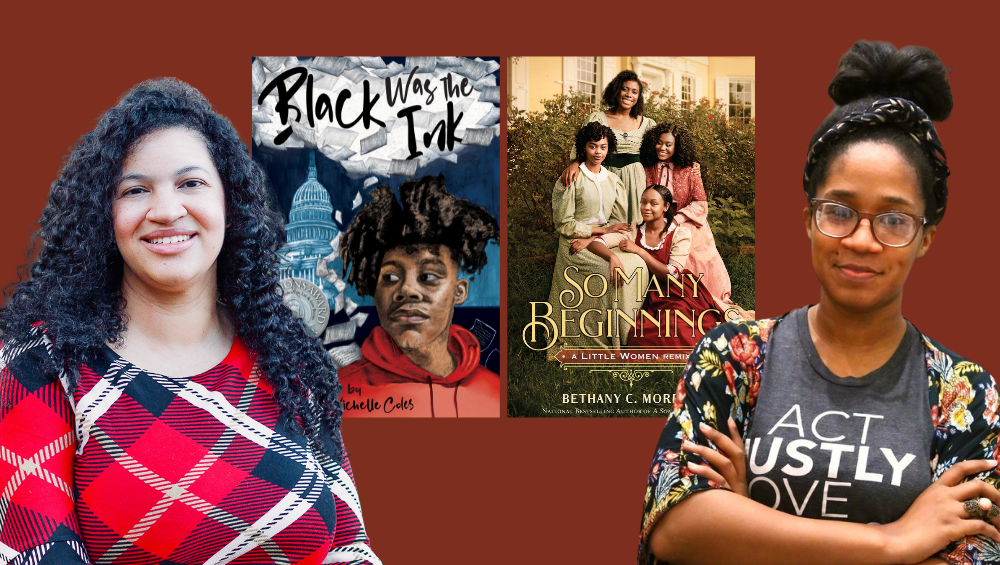 A VIRTUAL EVENING WITH YA AUTHORS MICHELLE COLES AND BETHANY C. MORROW

Black Was the Ink 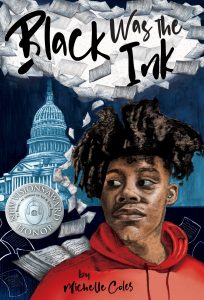 Through the help of a ghostly ancestor, sixteen-year-old Malcolm is sent on a journey through Reconstruction-era America to find his place in modern-day Black progress.

Malcolm Williams hasn’t been okay for a while. He’s angry and despondent and feels like nothing good ever happens for teens like him in D.C. All he wants is to be left alone in his room for the summer to draw or play video games–but no such luck. With growing violence in his neighborhood, his mother ships him off to his father’s family farm in Mississippi, and Malcolm is anything but pleased.

A few days after his arrival, his great-aunt tells him that the State is acquiring the farm to widen a highway. It’s not news Malcolm is concerned about, but someone plans to make it his concern. One minute Malcolm is drawing in the farmhouse attic, and the next he’s looking through the eyes of his ancestor Cedric Johnson in 1866.

As Cedric, Malcolm meets the real-life Black statesmen who fought for change during the Reconstruction era: Hiram Revels, Robert Smalls, and other leaders who made American history. But even after witnessing their bravery, Malcolm’s faith in his own future remains shaky, particularly since he knows that the gains these statesmen made were almost immediately stripped away. If those great men couldn’t completely succeed, why should he try?

Malcolm must decide which path to take. Can Cedric’s experiences help him construct a better future? Or will he resign himself to resentments and defeat?

Perfect for fans of Jason Reynolds and Nic Stone, and featuring illustrations by upcoming artist, Justin Johnson, Black Was the Ink is a powerful coming-of-age story and an eye-opening exploration of an era that defined modern America.

BUY BLACK WAS THE INK 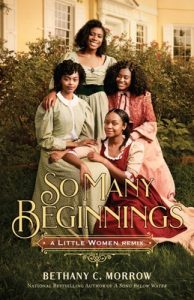 Four young Black sisters come of age during the American Civil War in So Many Beginnings, a warm and powerful YA remix of the classic novel Little Women, by national bestselling author Bethany C. Morrow.

North Carolina, 1863. As the American Civil War rages on, the Freedpeople’s Colony of Roanoke Island is blossoming, a haven for the recently emancipated. Black people have begun building a community of their own, a refuge from the shadow of the “old life.” It is where the March family has finally been able to safely put down roots with four young daughters:

Meg, a teacher who longs to find love and start a family of her own.

Jo, a writer whose words are too powerful to be contained.

Beth, a talented seamstress searching for a higher purpose.

Amy, a dancer eager to explore life outside her family’s home.

As the four March sisters come into their own as independent young women, they will face first love, health struggles, heartbreak, and new horizons. But they will face it all together.

BUY SO MANY BEGINNINGS

MICHELLE COLES is a debut novelist, experienced civil rights attorney, and mother of four. As a 9th generation Louisianan, she is highly attuned to the struggles that African Americans have faced in overcoming the legacy of slavery and the periods of government-sanctioned discrimination that followed. She is a proud alumna of Howard University School of Law and the University of Virginia. Her goal in writing is to empower young people by educating them about history and giving them the tools to shape their own destiny.

BETHANY C. MORROW is an Indie Bestselling author who writes for adult and young adult audiences, in genres ranging from speculative literary to contemporary fantasy to historical. She is author of the novels MEM and A SONG BELOW WATER, which is an Audie, Ignyte and Locus finalist. She is editor/contributor to the young adult anthology TAKE THE MIC, the 2020 ILA Social Justice in Literature award winner. Her work has been chosen as Indies Introduce and Indie Next picks, and featured in The LA Times, Forbes, Bustle, Buzzfeed, and more. She is included on USA TODAY’s list of 100 Black novelists and fiction writers you should read.