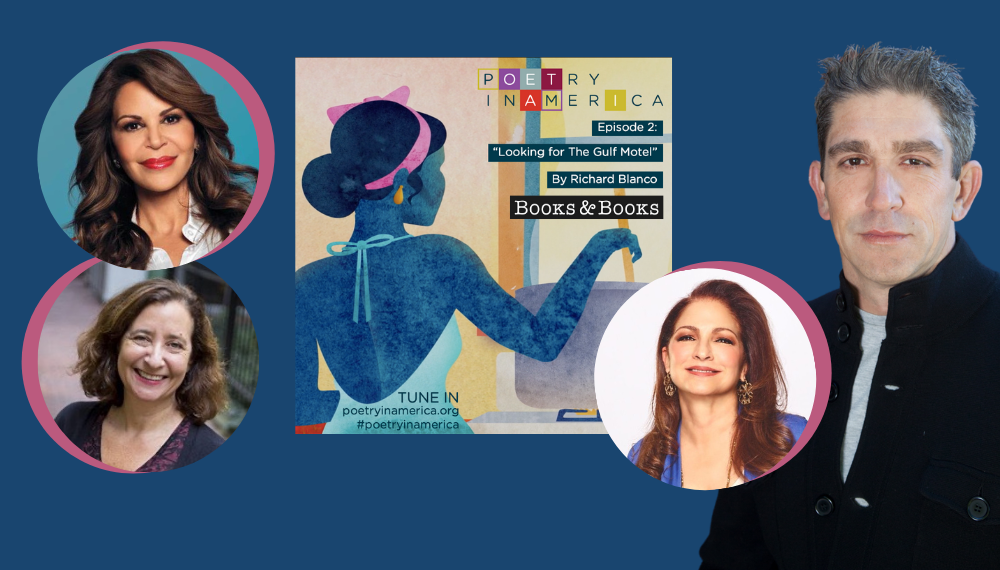 An Evening with Richard Blanco in celebration of his PBS episode of Poetry in America ft. Gloria Estefan

Join us for an evening with Richard Blanco & Nely Galán for a special screening and discussion of Blanco‘s poem “Looking for the Gulf Motel” from the PBS series Poetry In America, featuring Gloria Estefan.

“This poem literally makes me go back into my past.” — Gloria Estefan

Join us for a special screening and discussion of Blanco’s poem “Looking for the Gulf Motel” from the PBS series Poetry In America, featuring Gloria Estefan.

In celebration of Blanco’s episode, attendees will be immersed in a viewing and discussion featuring a live poetry reading from Blanco. Registrants will receive an exclusive print of Blanco’s poem while supplies last.

***Please note: This event will take place at Sanctuary of the Arts at 410 Andalusia Ave. Tickets are FREE and books will be available for purchase at the event.

Space is LIMITED. Please RSVP only if you plan on attending. Reservations will be honored first. Attendees who show up without an Eventbrite ticket will wait in a holding area until 6:15 and will only be seated if seats remain.

There are over 200 spots of metered parking surrounding the Sanctuary. There is also garage parking available across the street from Publix or Books & Books a short walk away.

Richard Blanco’s poem “Looking for The Gulf Motel” transports readers to 1970s Florida, recalling a Cuban-American family’s vacations on the sparkling sands of Marco Island. Blanco and international superstar Gloria Estefan join Elisa New and a chorus of Cuban American adults in Miami and middle school students in New York City to reflect on family and what it means to call a place home.

RICHARD BLANCO: Selected by Barack Obama as the fifth Presidential Inaugural Poet in US history, Richard Blanco is the award-winning author of two memoirs and four poetry collections, including City of a Hundred Fires, Directions to the Beach of the Dead, and How to Love a Country. His body of work and advocacy are characterized by his personal negotiation of cultural identity and universal themes of place and belonging. He currently serves as the first-ever Education Ambassador for the Academy of American Poets and is a member of the Obama Foundation’s advisory council. Connect with him online: richard-blanco.com, Twitter (@rblancopoet), Facebook (RichardBlancoPoetry), and Instagram (poetrichardblanco).

NELY GALÁN: Dubbed the “Tropical Tycoon” by The New York Times Magazine, Nely Galán is a women’s empowerment advocate, an Emmy Award–winning television producer, and the owner of Galán Entertainment, a dynamic, multicultural media company that has created more than seven hundred television shows in English and Spanish and helped launch ten channels around the world. The former president of Telemundo’s entertainment division, Galán is also the founder of the Adelante Movement, a national motivational tour and digital platform that unites and empowers Latinas socially, economically, and politically. She is a sought-after speaker who has spoken at the Coca-Cola Company, American Express, JPMorgan Chase, General Electric, the Clinton Foundation, and the United Nations, among other companies and organizations.