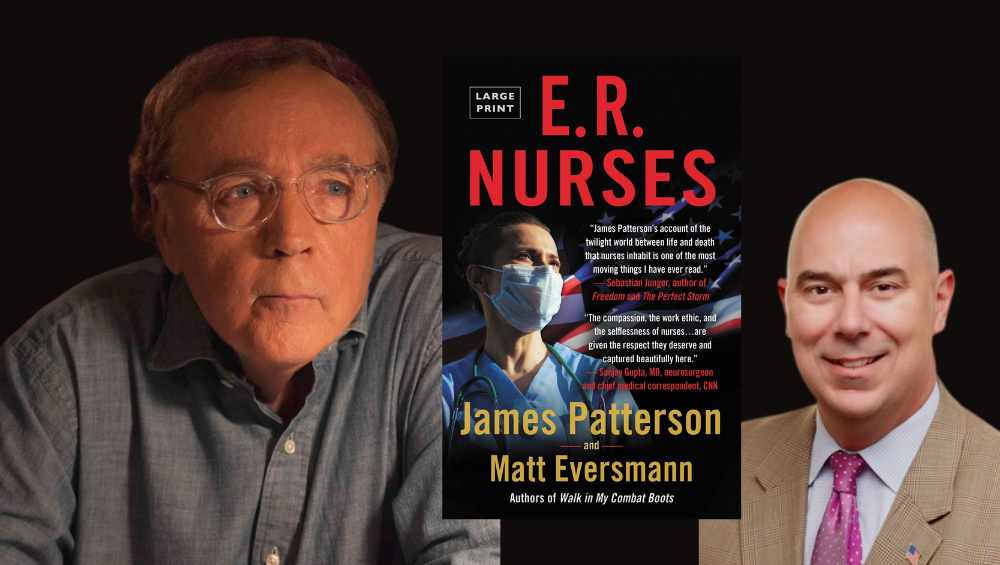 An Evening with James Patterson

In Conversation with Alison Levine 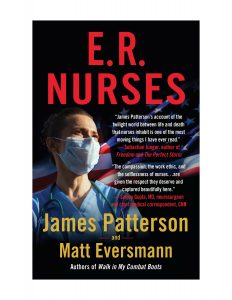 James Patterson and Matt Eversmann, #1 bestselling coauthors of Walk in My Combat Boots, powerfully present the medical frontline heroes who work to save our lives every day: E.R. Nurses.

“The compassion, the work ethic, and the selflessness of nurses … are given the respect they deserve and captured beautifully here.”
–Sanjay Gupta, MD, neurosurgeon and chief medical correspondent, CNN

“James Patterson’s account of the twilight world between life and death that nurses inhabit is one of the most moving things I have ever read.”
–Sebastian Junger, author of Freedom and The Perfect Storm

Around the clock, across the country, these highly skilled and compassionate men and women sacrifice and struggle for us and our families.

You have never heard their true stories. Not like this. From big-city and small-town hospitals. From behind the scenes. From the heart.

This book will make you laugh, make you cry, make you understand.

When we’re at our worst, E.R. nurses are at their best.

JAMES PATTERSON is the world’s bestselling author. His enduring fictional characters and series include Alex Cross, the Women’s Murder Club, Michael Bennett, Maximum Ride, Middle School, and Ali Cross, along with such acclaimed works of narrative nonfiction as Walk in My Combat Boots, E.R. Nurses, and his autobiography, James Patterson by James Patterson. Bill Clinton (The President Is Missing) and Dolly Parton (Run, Rose, Run) are among his notable literary collaborators. For his prodigious imagination and championship of literacy in America, Patterson was awarded the 2019 National Humanities Medal. The National Book Foundation presented him with the Literarian Award for Outstanding Service to the American Literary Community, and he is also the recipient of an Edgar Award and nine Emmy Awards. He lives in Florida with his family.

MATT EVERSMANN retired from the Army after twenty years of service. His last assignment was as an Infantry Company First Sergeant in the 10th Mountain Division during the surge in Iraq. He spent almost half of his career in the 75th Ranger Regiment and was a member of Task Force Ranger, the unit immortalized in the film Black Hawk Down. Matt and his family live in West Palm Beach where he runs his own consulting company, Eversmann Advisory.

Alison Levine is a history-making polar explorer and mountaineer. She has climbed the highest peak on each continent, served as team captain of the first American Women’s Everest Expedition and skied to both the North and South Poles. She holds an MBA from Duke University and served as an adjunct instructor at the United States Military Academy at West Point in the Department of Behavioral Sciences & Leadership.

Levine is a sought-after keynote speaker on the topic of leadership development and has addressed audiences ranging from Fortune 500 companies to the World Economic Forum in Davos. Having spent prolonged periods of time in some of the world’s most dangerous and inhospitable places, she addresses the topics of creating cohesive teams, taking responsible risks and developing no-nonsense leaders that can succeed in times of uncertainty.

Levine serves on the advisory board of the Coach K Center on Leadership & Ethics at Duke University and is a strategic advisor for the Thayer Leader Development Group at West Point. She was a contributing author to the book Leadership in Dangerous Situations: A Handbook for the Armed Forces, Emergency Services and First Responders (Naval Institute Press).