An Evening of Poetry with Peter Schmitt and Jeffrey Harrison

An Evening with Peter Schmitt and Jeffrey Harrison

Goodbye, Apostrophe and Between Lakes

In Goodbye, Apostrophe, his first new collection in more than a decade, nationally recognized and prize-winning poet PETER SCHMITT has assembled nearly 50 poems exemplary for their range and emotional power. From the hard lessons of childhood to the loss of parents, these poems confront the challenging issues of our time, including race, religion, abuse of varying kinds, and reflexive political correctness. By turns poignant and funny, elegiac and celebratory, formal and free, the mature work of a poet Richard Wilbur hailed as “one of the strongest talents in his generation” will resonate indelibly with any serious reader of American poetry. 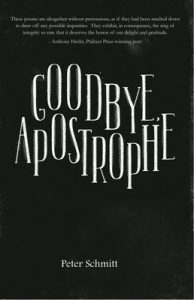 How does consciousness inhabit liminal spaces? In Jeffrey Harrison’s Between Lakes, the death of the speaker’s father places him in the ever-shifting zone between the living and the dead while also sending him back into his journey to manhood. Old arguments are reimagined: What does it mean to be a man? What does it mean to be a participant in one’s life as well as a witness and recorder of the lives of others? The exploration of these questions leads to new discoveries, including the way time reshapes the vision of one’s life and alters relationships, remaking a shared history. Harrison refrains from explanation, instead offering detail after trustworthy detail—less to prove a case than to imagine a life true to the original. Whether observing nature with steadfast precision or sensing the presence of his absent father while doing chores, Harrison sings the songs of experience in late middle life. 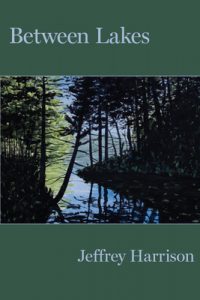 PETER SCHMITT is the author of six books of poems, including four full-length collections: Goodbye, Apostrophe, published in November 2020 by Regal House (regalhousepublishing.com/product/goodbye-apostrophe); Renewing the Vows (David Robert Books); Hazard Duty and Country Airport (Copper Beech). Two chapbooks, To Disappear, and Incident in an Apartment Complex: A Suite of Voices, are with Pudding House. He has received The Julia Peterkin Award (Converse College); The Lavan Award (Academy of American Poets); The “Discovery”/The Nation Prize; grants from The Florida Arts Council (twice); and an Ingram Merrill Fellowship. His poems have appeared in many leading journals, including The Hudson Review, The Nation, The Paris Review, Poetry, and The Southern Review, are widely anthologized and have been featured on NPR’s Writers Almanac. He has also worked as a reviewer of poetry and fiction, and as a freelance editor of novels, short stories, poetry, and creative nonfiction. He lives and teaches in his hometown of Miami, Florida, and can be reached through his website, peterschmittpoet.com.

Jeffrey Harrison’s sixth full-length book of poetry, Between Lakes, was published by Four Way Books in September 2020. His previous book, Into Daylight, (Tupelo Press, 2014) won the Dorset Prize and was selected by the Massachusetts Center for the Book as a Must-Read Book for 2015. Incomplete Knowledge (Four Way, 2006) was runner-up for the Poets’ Prize, and Feeding the Fire (2001) won the Sheila Motton Award from the New England Poetry Club. His first book, The Singing Underneath, was selected by James Merrill for National Poetry Series in 1987. A volume of his selected early poems, The Names of Things, was published in the U.K. by the Waywiser Press in 2006. He has received fellowships from the Guggenheim Foundation, the NEA, and the Bogliasco Foundation, among other honors, and his poems have appeared widely in magazines and anthologies, including Best American Poetry and The Pushcart Prize volumes, and been featured regularly in Ted Kooser’s column American Life in Poetry, The Writer’s Almanac, Poetry Daily, and other online and media venues. He lives in Massachusetts and can also be found at jeffreyharrisonpoet.com.