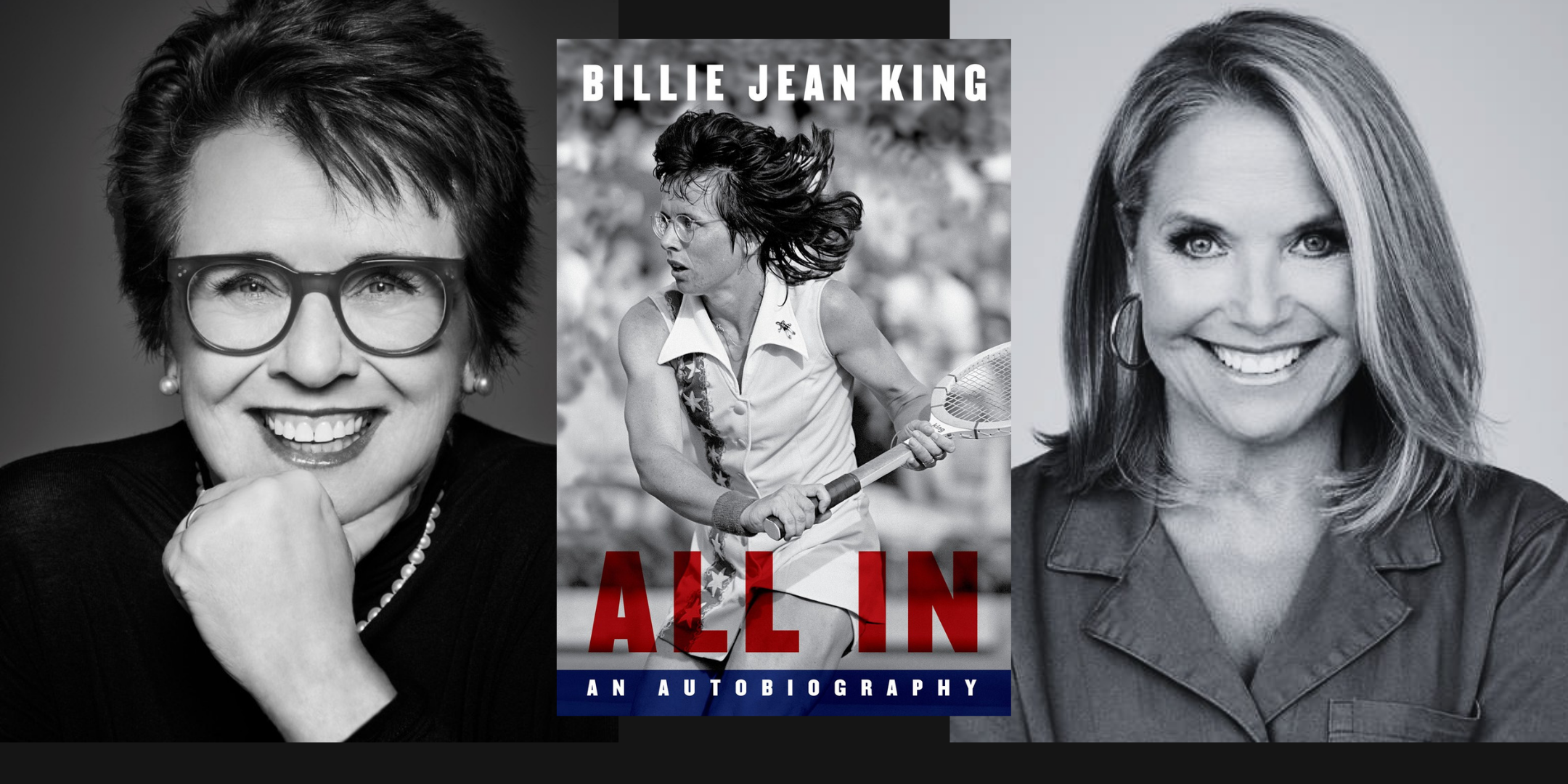 All In: An Autobiography: A Virtual Evening with Billie Jean King & Katie Couric

All In: An Autobiography 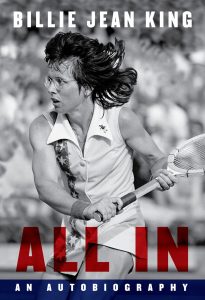 An inspiring and intimate self-portrait of the champion of equality that encompasses her brilliant tennis career, unwavering activism, and an ongoing commitment to fairness and social justice.

In this spirited account, Billie Jean King details her life’s journey to find her true self. She recounts her groundbreaking tennis career—six years as the top-ranked woman in the world, twenty Wimbledon championships, thirty-nine grand-slam titles, and her watershed defeat of Bobby Riggs in the famous “Battle of the Sexes.” She poignantly recalls the cultural backdrop of those years and the profound impact on her worldview from the women’s movement, the assassinations and anti-war protests of the 1960s, the civil rights movement, and, eventually, the LGBTQ+ rights movement.

She describes the myriad challenges she’s hurdled—entrenched sexism, an eating disorder, near financial peril after being outed—on her path to publicly and unequivocally acknowledging her sexual identity at the age of fifty-one. She talks about how her life today remains one of indefatigable service. She offers insights and advice on leadership, business, activism, sports, politics, marriage equality, parenting, sexuality, and love. And she shows how living honestly and openly has had a transformative effect on her relationships and happiness.

Hers is the story of a pathbreaking feminist, a world-class athlete, and an indomitable spirit whose impact has transcended even her spectacular achievements in sports.

BILLIE JEAN KING is the first female athlete to receive the Presidential Medal of Freedom. She is the founder of the Billie Jean King Leadership Initiative, the Women’s Tennis Association, and the Women’s Sports Foundation; she co-founded World Team Tennis; and she is part of the ownership group of the Los Angeles Dodgers. In 2006, the National Tennis Center was renamed the USTA Billie Jean King National Tennis Center. In 2020, the Fed Cup was renamed the Billie Jean King Cup, making it the first global team sports competition named for a woman. She was one of Life magazine’s “100 Most Important Americans of the 20th Century,” and in 2018 she received a Lifetime Achievement Award as part of the BBC Sports Personality of the Year Awards. She is an Adidas Global Ambassador, a past member of the board of the Elton John AIDS Foundation, and a past member of the President’s Council on Fitness, Sports and Nutrition. She lives in New York.

KATIE COURIC (@katiecouric) is an award-winning journalist, New York Times best-selling author and a cofounder of Stand Up To Cancer (SU2C). Since its launch in 2008, Stand Up To Cancer has raised more than $600 million to support cutting edge collaborative science and its research has contributed to nine new FDA approved therapies. In 2017, she founded Katie Couric Media (KCM), which has developed a number of media projects, including a daily newsletter, a podcast, digital video series and several documentaries. KCM works with purpose driven brands to create premium content that addresses important social issues like gender equality, environmental sustainability and mental health. Previous documentaries produced by KCM include: America Inside Out with Katie Couric , a six-part series for National Geographic; Gender Revolution: A Journey with Katie Couric , for National Geographic; Under the Gun , which aired on EPIX; and Fed Up , available on iTunes, Amazon and YouTube. Couric was also the executive producer of Unbelievable on Netflix and is developing other scripted projects. Couric was the first woman to solo anchor a network evening newscast, serving as anchor and managing editor of the CBS Evening News from 2006 to 2011 following 15-years as co-anchor of NBC’s Today show. She also hosted a syndicated show and served as the Yahoo Global News Anchor until 2017. Most recently, Couric was the first guest host of the iconic game show, Jeopardy!. She has won a duPont-Columbia, a Peabody, two Edward R. Murrows, a Walter Cronkite Award, and multiple Emmys. She was twice named one of Time magazine’s 100 most influential people and was a Glamour Magazine woman of the year three times. She has also received numerous awards for her cancer advocacy work; honored by both the Harvard and Columbia schools of public health, the American Cancer Society and The American Association of Cancer Researchers. In addition to writing The Best Advice I Ever Got: Lessons from Extraordinary Lives, Couric’s memoir will be published in the Fall of 2021.

THIS EVENT WILL BE PRE-RECORDED: PLEASE SEND YOUR QUESTIONS FOR THE AUTHOR TO [email protected]!

You will receive two reminder emails with your unique Zoom link, 24 hours and again 1 hour before the program. Please search your inbox for those emails from The Marcus Jewish Community Center of Atlanta. If you don’t see the emails, please check your SPAM/JUNK folder. Still have questions? Please email [email protected] The link is unique to you and is not shareable. If shared, you will not be able to access the program!

Event recording for ticket holders will be available 24 hours after the event for a limited time; please email [email protected] if you would like a copy.
On-demand recording of the event may be purchased on this ticketing page after the program.