22 Minutes of Unconditional Love: An Evening with Daphne Merkin and Mark Greif

An Evening with Daphne Merkin

22 Minutes of Unconditional Love: A Novel

As Daphne Merkin’s audacious new novel opens, a wife and mother looks back at the moment when her life as a young book editor is upended by a casual encounter with an intriguing man who seems to intuit her every thought.

Narrated by Judith in a time before the #MeToo movement, 22 Minutes of Unconditional Love charts the persistent hold the past has on us and the way it shapes our present. 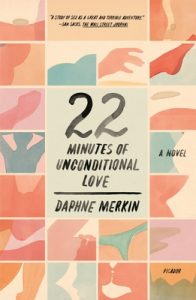 Daphne Merkin  is the author of five books: two novels, 22 Minutes of Unconditional Love (Farrar, Straus and Giroux, 2020 and Picador, 2021) and Enchantment (Harcourt Brace Jovanovich, 1986), which won the Edward Lewis Wallant Award for the best new work of fiction based on a Jewish theme; it was reprinted by Picador in July 2020 with a foreword by Vivian Gornick. Her memoir, This  Close to Happy: A Reckoning with Depression (Farrar, Straus and Giroux, 2018) received a front-page review in the New York Times Book Review. She has also published two collections of essays: Dreaming of Hitler: Passions & Provocations (1997) and The Fame Lunches: On Wounded Icons, Money, Sex, The Brontes, and the Importance of Handbags, which was named a New York Times Notable Book of 2014.  As a former staff writer for The New Yorker, Merkin’s cultural criticism frequently appears in The New York Times Book Review & Magazine, The Wall Street Journal, Bookforum, New York Review of Books, The New Republic, Departures, Elle, Travel + Leisure, Tablet, and many other publications. Merkin has taught writing at the 92nd Street Y, Marymount Manhattan College, Hunter College and Columbia University’s MFA program. She lives in New York City and gives private writing classes.  More information is available on https://www.daphne-merkin.com/

Mark Greif is co-founder of the literary and intellectual journal n+1, and an associate professor at Stanford University.  He looks at literature’s relation to the world: how new ideas are embraced or refused in fiction and nonfiction, and how arguments find their way into art.  Mark Greif is a scholar of American writing and thought, and a writer whose work has appeared in publications from the London Review of Books to the New York Times.